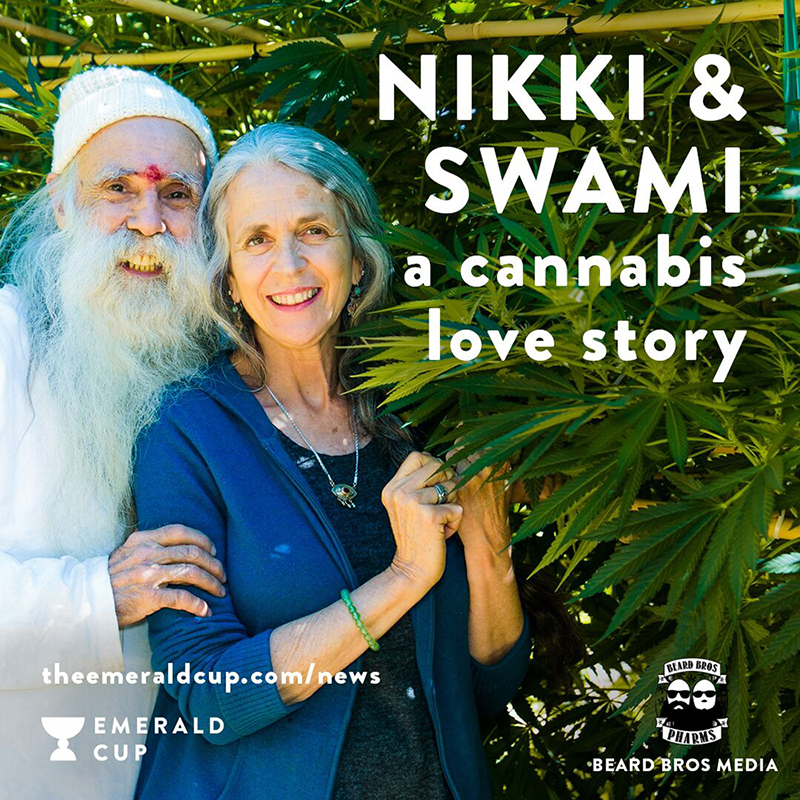 In the era of the 24-hour news cycle and so much division here in the U.S. and around the world, it is too easy for many people to fall back on indifference in the absence of love.

Those of us with a deep and honest relationship with cannabis are blessed, however, as this enchanted plant is rooted in love, as is the culture that has sprung up around it.

The Emerald Cup is a celebration of both the plant and the people and at the heart of it all in Mendocino County you find Nikki and Swami, a couple of old school hippies turned cannabis connoisseurs who have seen it all and smoked it all, and have learned a thing or two about love along the way.

IT USED TO BE FREE

In the spring of 1967, a young activist named William was attending the University of Wisconsin when he took his first toke. There was a growing bohemian/beatnik culture taking form on campus as anti-war protests, demands for social reform, and the concept of free love spread across the country but even many of William’s otherwise progressive peers steered clear of cannabis having been successfully brainwashed about its effects.

That same year, 2,000 miles to the west, William along with over 100,000 of America’s downtrodden youth – and more from around the globe – converged on the Haight-Ashbury neighborhood of San Francisco in what was later dubbed as the “Summer of Love”.

Though the numbers had thinned by the fall, the bohemian and hippie lifestyle had taken root in the region and in 1969, a teenage flower child named Nikki had her first puff of pot and her world would never be the same again.

“I was in the right place at the right time,” she says now, looking back, “that whole hippie scene was right outside my door.”

Glancing at her journal from the time, she finds little mention of the weed itself, but a highly detailed account of how delicious chocolate chips suddenly seemed!

It was right around that time that her orbit crossed with William’s.

Nikki saw him as an “older, cool, hippie, artist guy”. He was living with likeminded misfits in a San Fran commune and she was enthralled with the entire lifestyle. It wasn’t long before she found herself a part of the familial group of friends. But time tugs at even the tightest bonds, and the crew broke up over the years.

Nikki was doing her thing, regularly slanging “lids” or “4-finger” bags of bud for $15 apiece. My, how times have changed… Nikki has had a front row seat for all of those changes and she was still moving zips of weed to her friends into the 1990’s when the prices had boomed to $300-400 for an ounce.

William had literally shacked up in a fisherman’s hut on Telegraph Hill, creating art and growing enough outdoor weed to pay off his cannabis-friendly landlord each month.

At a heady house party in 1980 though, Nikki and William reconnected, falling in love, and the two have been spiritually intertwined ever since.

“Cannabis, for me, was a way of stepping out of my body,” says Nikki, “I ran the risk of becoming a nun, or some CEO’s wife in San Francisco…thank god for cannabis!”

For William, the political uprising of his generation was initially invigorating, but eventually rang hollow from a lack of love and a lack of spirituality – two core planks of his being since his discovery of cannabis. The plant awakened a new consciousness in William, shifting his studies from history and politics to art and philosophy. His creative expression was how he would protest oppression.

Working in film production, William traveled to India to tour and meet with various Babas and Gurus, and during his time there he was given a new perspective on cannabis and culture as he watched some of the most highly regarded figures from that society sitting around smoking hash (or charas) like other leaders might sip tea.

This was not his first visit to the region. In fact, both he and Nikki had separately done the “Hippie Trail” or the “Overland” in the 1970’s. This epic trip would take intrepid adventurers on a hike from London to Istanbul, then on through what are now war-torn regions of Iran, Iraq, and Afghanistan, on their way to a destination in Nepal or India.

Nikki and William took multiple extended trips to India together throughout the 80’s, and they decided to move there full time in 1992. The two had a summer home up in the Himalayas and a winter retreat down in Goa. They met amazing locals and fellow world travelers in their time there. They also discovered the psychedelic-trance dance culture there as parties would rage through the nights up and down the moonlit beaches.

In that year that followed, Nikki’s path through electronic dance music helped make a life-changing connection and William’s path through kindness and spirituality earned him a new moniker – he would now be known as Swami.

Once back in the Bay Area, Nikki was keen to spread her newfound love for EDM, and she and Swami plotted on ways to bring their favorite DJ, the legendary grandfather of psy-trance, Goa Gil, to the U.S. for a blowout event.

Nikki met a man involved in event production named Michael Gosney, who in turn introduced her to a friend of his from Mendocino named Tim Blake.

Blake, a spiritual wanderer in his own right, had never heard much digital dance music but he had a plot of land in Mendo that had once been a biker retreat and he had an itch to throw a party there.

So the first few mythic shindigs at what would later serve as the original home of the Emerald Cup were simply known as the Goa Gil Parties but they established Area 101 and cemented the relationship between Nikki and Tim which is stronger than ever today.

When Swami came back stateside, he and Nikki took up full time residence in Mendocino County, securing a sweet piece of land where they continue to cultivate their own full-sun grown cannabis crop each year.

They both spent many hours sitting around trim or smoke sessions with Tim and friends, contemplating what “legal weed” would look like, and chuckling that one day they might see a chili-cook-off of cannabis where growers and smokers could get together to sample each other’s buds and fairly judge them against one another.

It was out of those hazy discussions that the Emerald Cup was born, and Nikki and Swami have been there from the beginning helping Tim and his family to cultivate the event from six judges, roughly 30 entries, and one vendor selling marijuana memorabilia, into the spectacular experience that it is today.

Truly a celebration of the cannabis plant, the Emerald Cup is a reflection of the farmers that make it possible and Nikki is confident that despite the woes we see in the industry today, the love within the cannabis culture has only grown.

“We’re in this mess together and we’re all trying to make it work and because of cannabis we have met so many people that we otherwise never would have met,” says Nikki.

Swami agrees, adding, “In the old days, there was a code of silence and a shared risk to everyone because the smoker who had an eighth could go to jail for just as long as the grower who had a couple of pounds. So we created a kind of clandestine society where you knew who the heads were and you knew who the freaks were… and that’s how we didn’t get busted.”

He finds it interesting now to see lines being drawn through some of those decades-long relationships as some farmers strive to get legal while others continue to buck the system as they have for so many years.

These difficult choices are highlighted by the influx of fancy suits, shiny shoes, and large sums of corporate cash that are starting to dominate an industry that was made possible by a much different demographic.

“That’s what we love about the Emerald Cup,” says Nikki, “We still feel the love there.”

Swami says, “When you go to the vendor’s area and you go around and look at all the different growers, you end up knowing half the people there, or you’ve heard of them, or they’ve heard of you and it’s all lubricated by cannabis. And it’s the best cannabis at the Emerald Cup… it’s sun-grown, it’s organic, it’s stuff that people grow in small batches and put their love into.”

Nikki chimes back in, “The people that we are healing with cannabis – this is love! When we hear stories of veterans that have changed their life, this is the love we can share right now and spread.”

“We go to these other conferences and you can’t even smoke there,” exclaims Swami. “This is what we do at the Cup, we sample flower. The Emerald Cup being organic is something that we need to honor and preserve. It has changed the vocabulary about how we talk about cannabis flowers… in terms of terpenes, in terms of flavors… The Emerald Cup has raised the consciousness.”

Nikki and Swami helped to plant the seed for all of it and they have participated for the past 16 years as judges and panelists, but the role they love the most is handing out the awards at the end of the event each year.

“It’s a recognition by your peers,” Swami reminds us as he looks back on the experience of judging over 2,000 samples over the years.

Nikki and Swami’s passion for cannabis has taken them all over the world – putting smoke in the air from India, to Nepal, to Thailand, to Israel, and beyond – but they call the Emerald Triangle their true home and the Emerald Cup their true love.

Known for growing some of the finest craft cannabis in Southern California, brothers Bill and Jeff of Beard Bros. Pharms have also earned a reputation as outspoken advocates of the plant and all of the benefits that it offers. With devoted support for veteran’s rights, patient’s rights, prisoner’s rights, and all of our rights over our own sovereignty as adults, Beard Bros. Pharms has not only harvested some outstanding cannabis, but some compelling stories about it as well. Be sure to sign up for their weekly Friday Sesh email newsletter for free at beardbrospharms.com/news