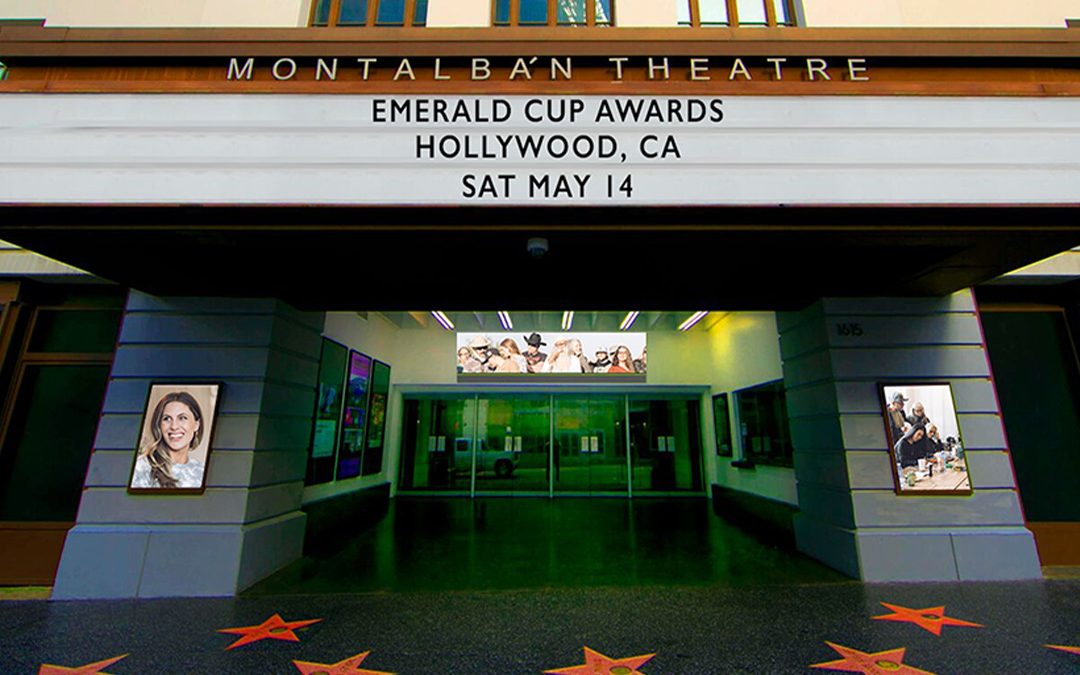 Presented live at the iconic Ricardo Montalbán Theatre in partnership with Boveda and PurePressure by Agrify, the “Academy Awards of Cannabis” lived up to all the hype, delivering a star-studded red carpet event with over 180 Emerald Cup Awards being handed out to California’s most talented cultivators and craftspeople. 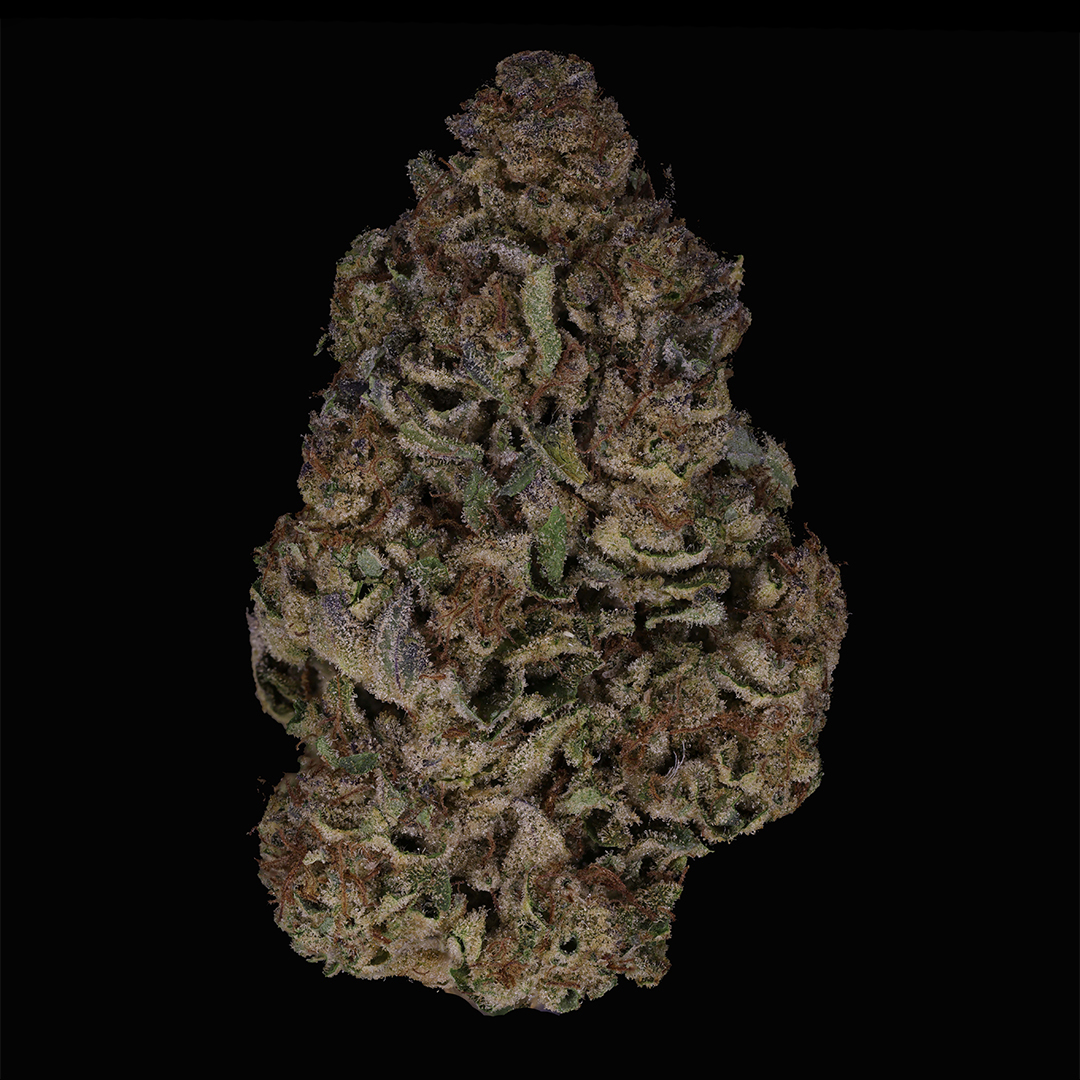 Despite operating in a marketplace overburdened by high taxes and strict regulations, California’s cannabis producers stepped up in 2022, placing over 700 top-shelf entries into over 50 distinct categories and boosting our entry total by roughly 25% over 2021.

The 2021 competition quite literally redefined the way that our official Emerald Cup Judges sort, sample, and rank certain categories with a new focus on terpenes and the role that they play in delivering an optimal experience with cannabis.

Though there is still a lot of educating and reprioritizing to do in California’s recreational cannabis marketplace, the effort put forth by the Emerald Cup and SC Labs for last year’s competition set in motion a wave of knowledge all the way up the supply chain, from cultivators to consumers, that potent cannabinoid profiles are important, but that the all-natural aromas, flavors, and effects of terpenes play an equally important role in achieving the highly sought after entourage effect.

With a goal of deepening the market’s understanding of the importance of terpenes, the Emerald Cup once again partnered with SC Labs in 2022, bringing NAPRO Research into the fold as well in a collaborative effort to create what is now known as the Emerald Cup Cannabis Classification System based on PhytoFacts® powered by SC Labs.

This user-friendly new system takes cannabis classification beyond the antiquated and inadequate duopoly of Indica vs. Sativa using industry-applied science to quantify the subtle nuances between various cultivars and phenotypes that make the cannabis plant so unique. We can finally answer the once hypothetical question, “What’s in a strain name?” Well, now we can show you exactly what’s in each one, or what ought to be.

The 2021 Emerald Cup attempted to presort categories like Flower and Concentrates into the six most common terpenes, based on which one was most dominant in that entry.

This year, those entries are being analyzed for 17 different terpenes, with the top 1-3 most dominant terpenes being used to determine which category that sample should be sorted into.

To simplify this process and the language associated with it – not only for Emerald Cup Judges, but for everyone in the marketplace – the Emerald Cup Cannabis Classification System based on PhytoFacts® powered by SC Labs is broken down into six categories:: 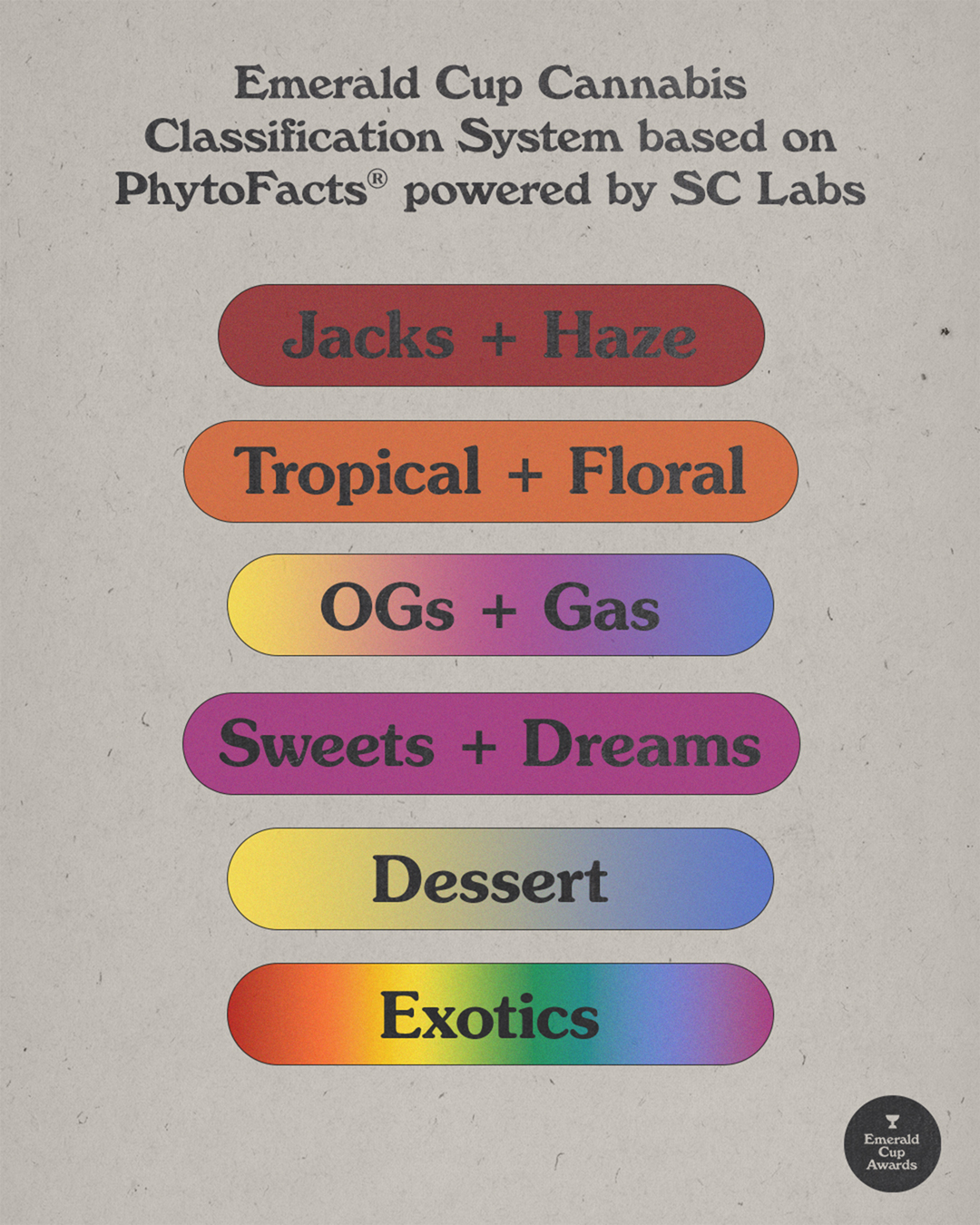 These categories make use of all 17 terpenes that SC Labs had tested for, highlighting and honoring the way that they interact with one another to create the familiar flavors that connoisseurs crave in cannabis, using sensible category names that everyone from seasoned smokers to the canna-curious can relate to and likely gravitate toward.

Jaded cannabis consumers are finally tuning in to the fact that buying cannabis products based on THC totals alone rarely leads to an optimal experience.

TRENDS COMING OUT OF THE 2022 EMERALD CUP

The test results provided by SC Labs for Emerald Cup entries in 2022 highlight how even the slightest changes in terpene profile ratios mark the only difference between some of the most popular and best-selling buds and extracts on the market.

These results also confirm what many savvy cannabis consumers have come to realize – that the Cali cannabis market is being flooded with similar caryophyllene and limonene dominant terpene profiles. The inevitable result of this increasing homogeneity is a lack of variety on dispensary shelves which provides one more reason for flavor-seeking consumers to opt out of the regulated market if every product looks, smells, and tastes the same.

As a near mirror reflection of the state’s cannabis market since 2004, the Emerald Cup was traditionally a competition that drew a wide variety of entries and terpene profiles, with myrcene-dominant cultivars like OGs making up the majority of samples. For many years, this trend lined right up with the hundreds of thousands of terpene tests that SC Labs was doing in the marketplace which revealed that myrcene dominant samples made up 43% of their overall market data, the highest total of the six main terpenes being analyzed.

In 2021, however, the Emerald Cup entry data deviated from broader marketplace data for the first time and we saw myrcene-dominant samples decline and be replaced by a massive influx of caryophyllene-heavy cultivars that would generally fall into our “Dessert” category – your Ice Cream Cakes, Wedding Crashers, Gelatos, etc. Those sorts of terp profiles made up 54% of all Flower entries in the 2021 Emerald Cup and, sure enough, the main Flower category winners last year were Gelonade, a cross of Lemon Tree and Gelato #41 (caryophyllene dominant), Ice Cream Cake, a cross of Wedding Cake and Gelato (caryophyllene dominant), and Gorilla Snacks, a GG #4 and Girl Scout Cookies cross (caryophyllene dominant).

Instead of seeing this as an opportunity to do something unique and different, too many cultivators doubled down on the trend and in the 2022 Emerald Cup, anywhere from 65-80% of the Flower entries were caryophyllene/limonene dominant “Dessert” strains.

Conversely, in the terpinolene-heavy “Jacks & Haze” category (think Durban Poison, Trainwreck, S.A.G.E., Super Lemon Haze, etc.), this year’s Indoor Flower competition received only TWO entries. Not only does this present opportunity for cultivators with diversified stables of strains to stand out more easily in a competition like the Emerald Cup, but it could reveal an underserved niche in the overall cannabis market where money is perhaps being left on the table

The PhytoFacts® reports produced by SC Labs for 2022 Emerald Cup entries contain a plethora of information, including precise cannabinoid and terpene breakdowns. 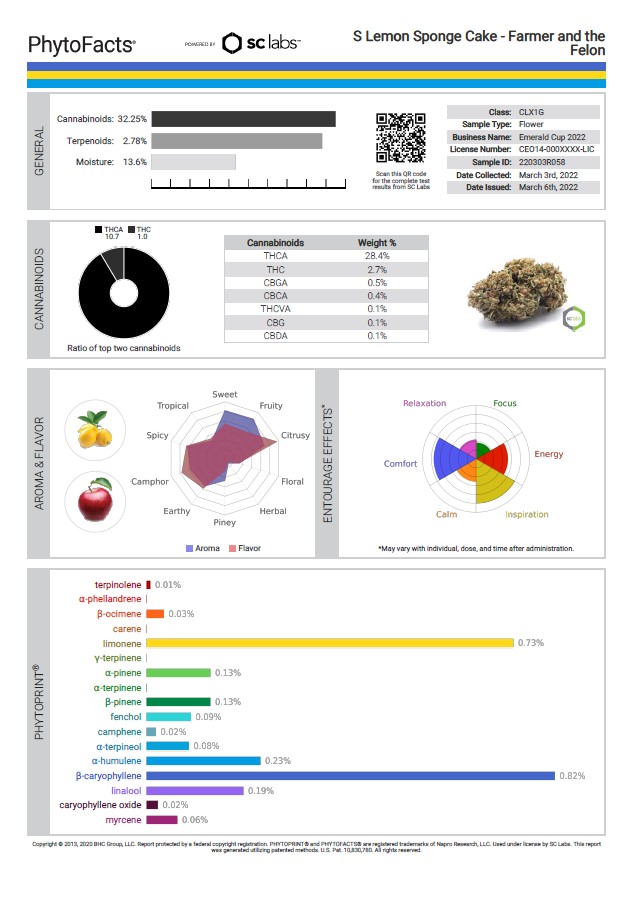 As Alec Dixon from SC Labs so astutely points out, however, it is the variance between those two totals that can separate the winners from the losers both in Emerald Cup competitions and in the marketplace.

“The Emerald Cup is almost a snapshot of the larger market, as well as a forecast of the harvest season,” says Dixon. “So, if 65% of all weed grown in the state this year is caryophyllene/limonene Desserts, it’s going to be a really difficult year to sell your Gelato or Zkittlez unless your total terpenoid percentage is well above the market average of 1.4%.”

Again, this tracks directly from the market at large right down to the Emerald Cup competition. This year’s 1st Place winner for Sungrown Flower – Lemon Sponge Cake by Farmer and the Felon – came in with a whopping 2.78% total terpenoids providing a flavorful punch that had the Emerald Cup Judges grinning from ear to ear and propelled this outdoor entry to the esteemed title of “Best in Show” in 2022.

All cannabis products sold in the regulated marketplace in California must be third-party lab tested for potency and for purity. However, there is currently no mandate from the state that products must be tested for terpene content. As the importance of terpenes in the full spectrum consumer experience with cannabis comes more clearly into focus, though, smart brands are requesting and compiling this data and using it to fine-tune almost all aspects of their operation.

“There has been this massive loss of biodiversity in this chase toward THC,” says Dixon, adding, “Everyone has bailed on their cherished and unique genetics to grow nothing but Gelato and, as a result, it’s leading to the homogenization of cannabis.”

It is no coincidence that the market demand for high THC has led to a flood of caryophyllene-dominant “Dessert” strains as their naturally lower total terpenoid content (typically maxing out around 4% in dried flower) leaves ‘room and resources’ in the trichome for increased cannabinoid production.

Compare this to categories like “Jacks & Haze”, “Tropical & Floral”, or “Sweets & Dreams” which tend to house monoterpene-dominant strains that can top out at 5-7% total terp content but balance that with THC totals in the 20-25% range.

Will the “Dessert” trend continue into 2023, or will farms begin to diversify their selection of plant genetics?

Will more brands – particularly Distributors – focus on terpene preservation in the supply chain?

The Emerald Cup, SC Labs, and California’s top cultivators and craftspeople are all committed to finding out.